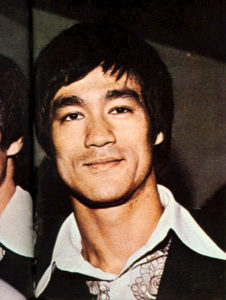 Born Lee Jun Fan, on November 27, 1940, in San Francisco, California. His father, a Hong Kong opera singer, moved with his wife and three children to the United States in 1939; his fourth child, a son, was born while he was on tour in San Francisco. Lee’s mother called him “Bruce,” which means “strong one” in Gaelic. Young Bruce appeared in his first film at the age of three months, when he served as the stand-in for an American baby in Golden Gate Girl.

In 1941, the Lees moved back to Hong Kong, then occupied by the Japanese. Apparently a natural in front of the camera, Bruce Lee appeared in roughly 20 films as a child actor, beginning in 1946. He also studied dance, once winning a cha-cha competition. As a teenager, he became a member of a Hong Kong street gang, and in 1953 began studying kung-fu to sharpen his fighting skills. In 1959, after Lee got into trouble with the police for fighting, his mother sent him back to the U.S. to live with family friends outside Seattle, Washington.

Lee finished high school in Edison, Washington, and subsequently enrolled as a philosophy major at the University of Washington. He also got a job teaching the Wing Chun style of martial arts that he had learned in Hong Kong to his fellow students and others. Through his teaching, Lee met Linda Emery, whom he married in 1964. By that time, Lee had opened his own martial arts school in Seattle. He and Linda soon moved to California, where Lee opened two more schools in Los Angeles and Oakland. At his schools, Lee taught mostly a style he called Jeet Kune Do.

Lee gained a measure of celebrity with his role in the television series The Green Hornet, which aired from 1966 to 1967. In the show, which was based on a 1930s radio program, the small, wiry Lee displayed his acrobatic and theatrical fighting style as the Hornet’s loyal sidekick, Kato. He went on to make guest appearances in such TV shows as Ironside and Longstreet, while his most notable role came in the 1969 film Marlowe, starring James Garner. Confronted with the dearth of meaty roles and the prevalence of stereotypes regarding actors of Asian heritage, Lee left Los Angeles for Hong Kong in 1971, with his wife and two children (Brandon, born in 1965, and Shannon, born in 1967).

Back in the city where he had grown up, Lee signed a two-film contract. Fists of Fury was released in late 1971, featuring Lee as a vengeful fighter chasing the villains who had killed his kung-fu master. Combining his smooth Jeet Kune Do athleticism with the high-energy theatrics of his performance in The Green Hornet, Lee was the charismatic center of the film, which set new box office records in Hong Kong. Those records were broken by Lee’s next film, The Chinese Connection (1972), which, like Fists of Fury, received poor reviews from critics when they were released in the U.S.